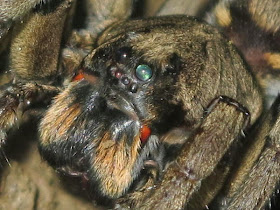 Regularly reading blogs that discuss plants and animals in your area is a great way to learn of things you should keep a watchful eye out for.  Without Jim McCormac’s post about the discovery of the Carolina Wolf Spider in , I would never have recognized this face when I saw it. 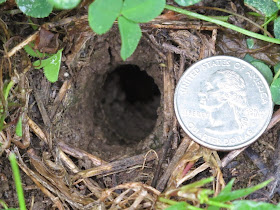 Back in April, I mentioned this spider hole dug into one of my vegetable garden beds.  It’s located in a portion of growing bed that has been given over to an ever expanding clump of Butterfly Weed.  The hole has continued to grow in size through the summer and is now larger in diameter than a quarter.  The diameter of the quarter is 24 mm, so this is quite an impressive hole. 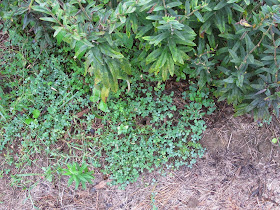 I occasionally give the hole a look when I work in the garden, but it has always appeared lifeless. 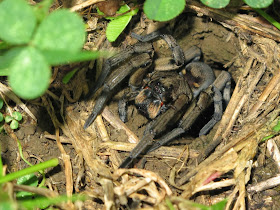 Yesterday evening, I found this blocking the entrance.  A Wolf Spider.  From the size, I think this is probably a female.  This is a large spider that digs and lives in a large burrow. 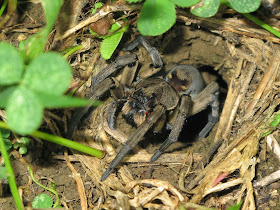 These spiders primarily hunt by waiting at the entrance to their burrow and grabbing passing insects.  I tried to coax the spider out of its burrow by using the end of a grass stalk to simulate an insect.  The spider was uninterested and refused to move into the open. 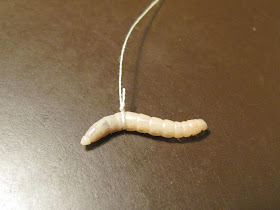 I don’t have any of the sophisticated equipment mentioned in Jim’s post, so I have to use more mundane methods of enticing finicky creatures into the open.  My first complete sentence is reported to have been “Let’s go fishing” and through the years I’ve fished for some unusual quarry.  I see no reason not to fish for spiders.  Using a Tenebrio beetle larva, aka mealworm, I prepared my tackle for deep soil spider fishing. 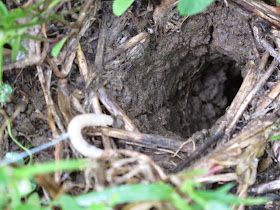 I first tried the mealworm on the edge of the burrow.  I suppose I had already annoyed the spider too much with the grass stalk.  It wouldn’t rise to the bait. 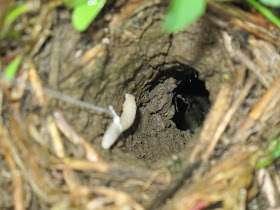 I sent the bait on down the hole.  You can see the furry bulk of the spider hiding in the shadows. 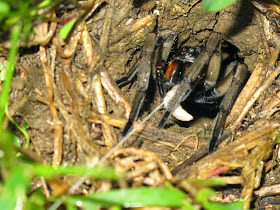 The strike was sudden.  I quickly took up the slack to keep the spider from backing down the burrow. 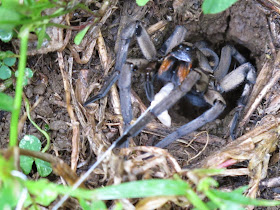 The spider was a strong opponent, but I worked her up to the top of the burrow. 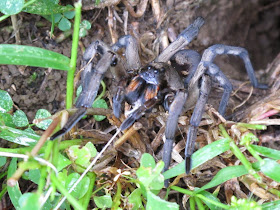 With only her hind legs keeping contact with the burrow wall, she held firm and refused to advance any farther.  Her fangs are firmly imbedded in the mealworm. 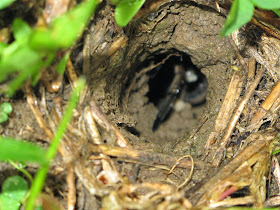 In a flash, she’s gone with my bait.  If I feed her often enough, she might overcome her shyness and allow for a better viewing.  Most of the descriptions for this species refer to features found on the underside of the body.  I guess I'll also have to teach her to roll over.  For more information on this fascinating species, check out Jim’s blog.
Steve Willson at Wednesday, September 03, 2014
Share